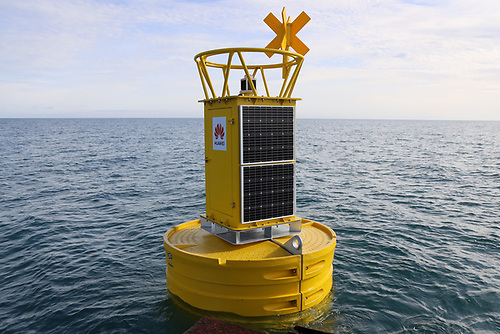 Cyprus Subsea is happy to announce its support of the Smart Whale Sounds Project. This project aims to better identify cetacean species from their unique vocalizations and examine the impact of underwater noise pollution on Ireland’s marine life in the Celtic Sea.

The marine project involves listening to and recording the acoustic vocalization of cetaceans – dolphins, whales and porpoises – off the southern coast of Ireland in real-time. Through its TECH4ALL Initiative, Huawei Ireland provides funding and network support. RFCx trains sophisticated AI algorithms to automate the identification of different marine species call types.

Cyprus Subsea was in charge of procuring a system consisting of an Ocean Sonics icListen broadband digital hydrophone and a GSM bridge. The GSM bridge forwards the acoustic streams from this hydrophone to the Huawei cloud in real-time.

Project partners integrated this system on an especially designed environmental data buoy. The two ton, 13-foot long buoy was recently deployed 9 kilometers off the coast of County Cork. The buoy will remain offshore for the next year to gather cetacean acoustic data.

The project’s overall goal is to utilize the generated data to create a marine wildlife detection and classification model.

Ireland is home to 25 species of resident and migratory cetaceans, which accounts for one-third of all cetaceans worldwide. With so many members of the cetacean species visiting the Celtic Sea to forage, rest and reproduce, this technology has huge potential to enhance how marine mammals are monitored in Irish waters. The resulting detection and classification model has the potential to be scaled up for other projects around the world.

Following this successful deployment, the gathered acoustic data provides baseline monitoring for Marine Protected Areas. Additionally, this acoustic data provides advising on habitat assessments for offshore construction. Lastly, high quality acoustic data is key to creating an early warning system. Such a system will slow ships in areas where whales and other cetaceans are present.

Emer Keaveney, the Co-Founder and Executive Director of ORCAIreland and this project’s lead researcher, reported that higher levels of marine traffic including container ships, speedboats and eco-tour operators result in significant noise pollution.

Sound pollution causes as much damage to marine life as overfishing, pollution and climate change, and is believed to cause behavioural changes that interfere with the health and survival of the animals. Informed estimates suggest that ocean noise levels are at least 10 times higher today than they were a few decades ago.

In summary, a real-time detection system for mariners will reduce both noise pollution and the risk of ships striking marine mammals. As Boat Skipper, Kieran Collins, notes, this is good news for the whales and good news for the wildlife.

For more coverage of the start of this project:

Find us on Social Media